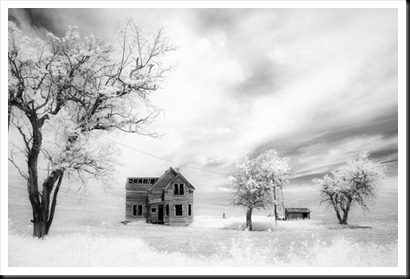 I went on a little tour last Sunday with a few local camera club members. We were primarily scouting/reviewing areas for future shooting. Along the way, we did get to grab some images. Given it was bright midday light I decided I would use my IR camera. This particular scene struck me as a good use of IR. IR adds mystery to an already mysterious place. Who lived here? Why did they leave? When did they go? What was their life like? This was out in the middle of no where. The large sky and the house dwarfed by the large tree add to this feel of remoteness and insignificance.