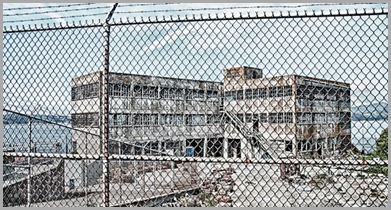 I thought I would take this shot from Alcatraz and walk you through what I was thinking about as I composed the shot and why I processed it the way I did.

The shoot: In some respects this shot was away from the main Alcatraz “attractions” but it caught my eye because of the barbed wired on top of the fence. I felt at the time shooting through the fence would convey the sense of imprisonment. Next I had to decide how to frame the image. I carefully chose where the fence supports were placed. The vertical post was aligned along the building corner and at around 1/3 of the frame space. This seemed to be the least intrusive way to include it. The lower horizontal was placed along the lower edge of the building for the same reason. Keeping the shot a bit wide helped add to a feeling of distance and separation. The prisoners clearly felt that 1.25 mile distance from San Francisco. Keeping the shot wide also let me include the barbed wire which I felt was important to the overall context.

Post processing: This was an HDR image processed with HDR Efx Pro. I did three primary things during the processing. One, desaturated the image to make it more dreary. Two, allowed the white balance to shift a bit to the blue side – prison seems more like a cool place than a warm one. Three, went with harsh contrast which makes the image a bit more edgy.l Prison is a harsh place.